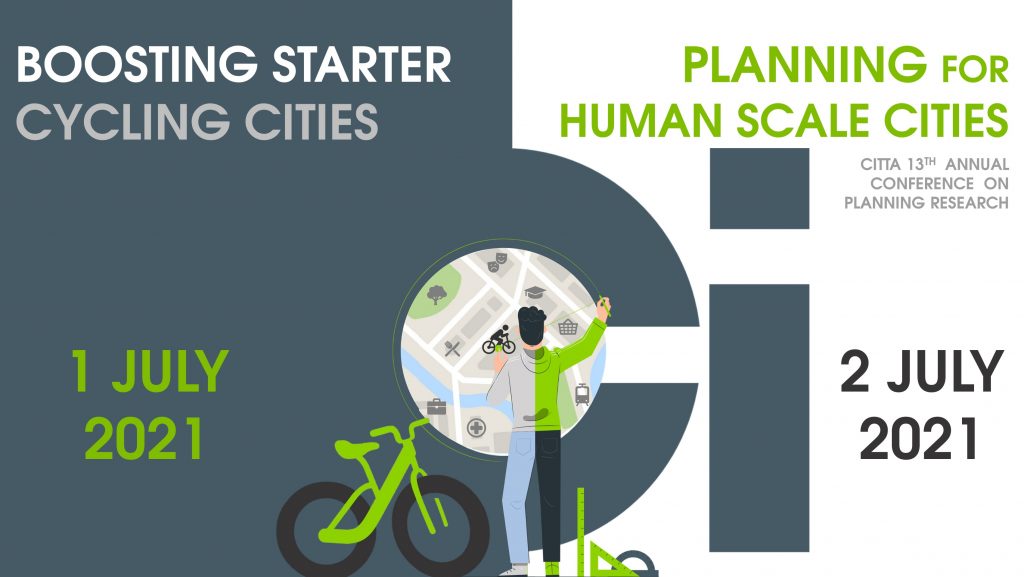 The idea of planning for human scale cities is not new. Many have argued in its favour for several decades. But never has it been so strongly needed and more widely recognised as today. One year into the COVID 19 pandemic and still with an uncertain future, cities all over the world have witnessed unprecedented movements for change. The general lockdown of hundreds of cities has led people to recognise the importance of closeness: to other people; to everyday activities; to high-quality public space, amongst others. Planning the human scale city raises issues of quality of life in urban environments that largely surpass the concerns with economic development and market surplus. It emphasises the role of cities in providing quality of life and pleasurable experiences, encompassing physical and psychological environments. This human-centred approach focusses on the user-friendliness of urban environment and on generating lively and liveable cities.

To contribute to this debate, project BooST and CITTA (Research Centre for Territory, Transports and Environment) organized the project’s final conference in partnership with CITTA’s 13th Conference on Planning Research. Thus, multiple events were organized in theme of the human scale city and of the bicycle as a means to achieve this end.

The Conference in itself was divided in two days. The first, of a more professional scope, focused on the implementation of the bicycle in starter cycling cities. The second, of a more scientific scope, focused on planning for human scale cities. Also in the scope of this conference, a workshop for PhD students was organized.

On July 1st, 2021, the professional component of the final conference of project BooST occurred in virtual format, and in Portuguese.

This day presented the project results, specifically the results regarding the implementation of the tools developed to support the planning of cycling strategies. The aim was to incentivize the discussion on future steps to take in the promotion of bicycle use in Portugal. The event included contributions from municipal representatives, from companies in the bicycle area, and from bicycle activist groups.

Throughout the day, in addition of BooST’s results, cycling strategies implemented in Portuguese cities were presented and a round table reflected on the results of the tools, the strategies and their implications for the future of the bicycle in Portugal. 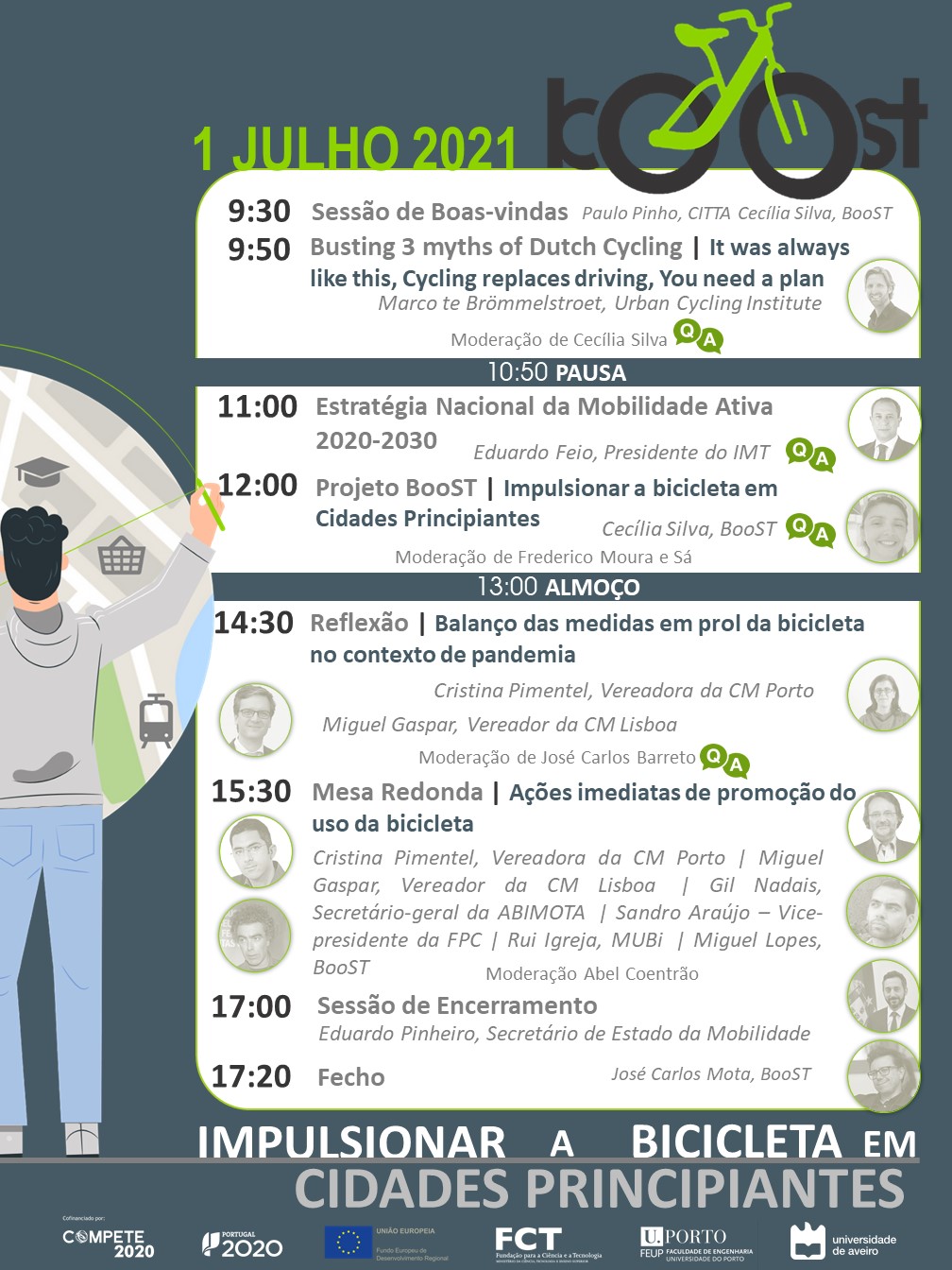 On July 2nd, 2021, the scientific component of the final conference of project BooST occurred in partnership with CITTA’s 13th Conference on Planning Research. The day hosted plenary and parallel sessions, with contributions of multiple works in the scope of planning for the human scale. As with all CITTA conferences, the event was hosted in English.

Track 1 explores in detail the intricacies of this transport mode. We encourage reflexions on the role of the bicycle in the transition process to more human scale cities and what strategies can be put into place to facilitate its implementation. Reflections on how to overcome resistance typical to starter cycling contexts is encouraged.

Track 2 dives into the lively dynamics of urban areas and the multitude of systems that guide its daily operation. Here, a discussion is promoted on numerous aspects of urban living, planning and design that define the urban experience.

Track 3 seeks to understand the role of urban design in the daily experience of urban areas. Special consideration will be given to the pedestrian mode and its key role for the enjoyment of the city.

4. The spatiality of Urban Settlements: The Morphology of Human Scale Cities.

Track 4 explores the large scale spatial analysis of the urban structure, exploring aspects such as urban form and morphology. A discussion is promoted on how can the history of the formation and development of urban areas guide its future planning process.

Track 5 aims to untangle the complex connections between urban change dynamics, transformative planning, and social well-being. It approaches urban change from multiple perspectives, considering dimensions such as economy, housing, tourism, inclusiveness, and agency, and seeks to understand how the ties between them can provide the opportunity to advance a more human scale city, emphasizing the role of governance arrangements for transformative planning.

Track 6 proposes a reflection on ongoing and future changes in transport planning and what their impacts are to human needs and space. These can include new planning support systems, modelling procedures and integration of new technologies and infrastructure configurations. 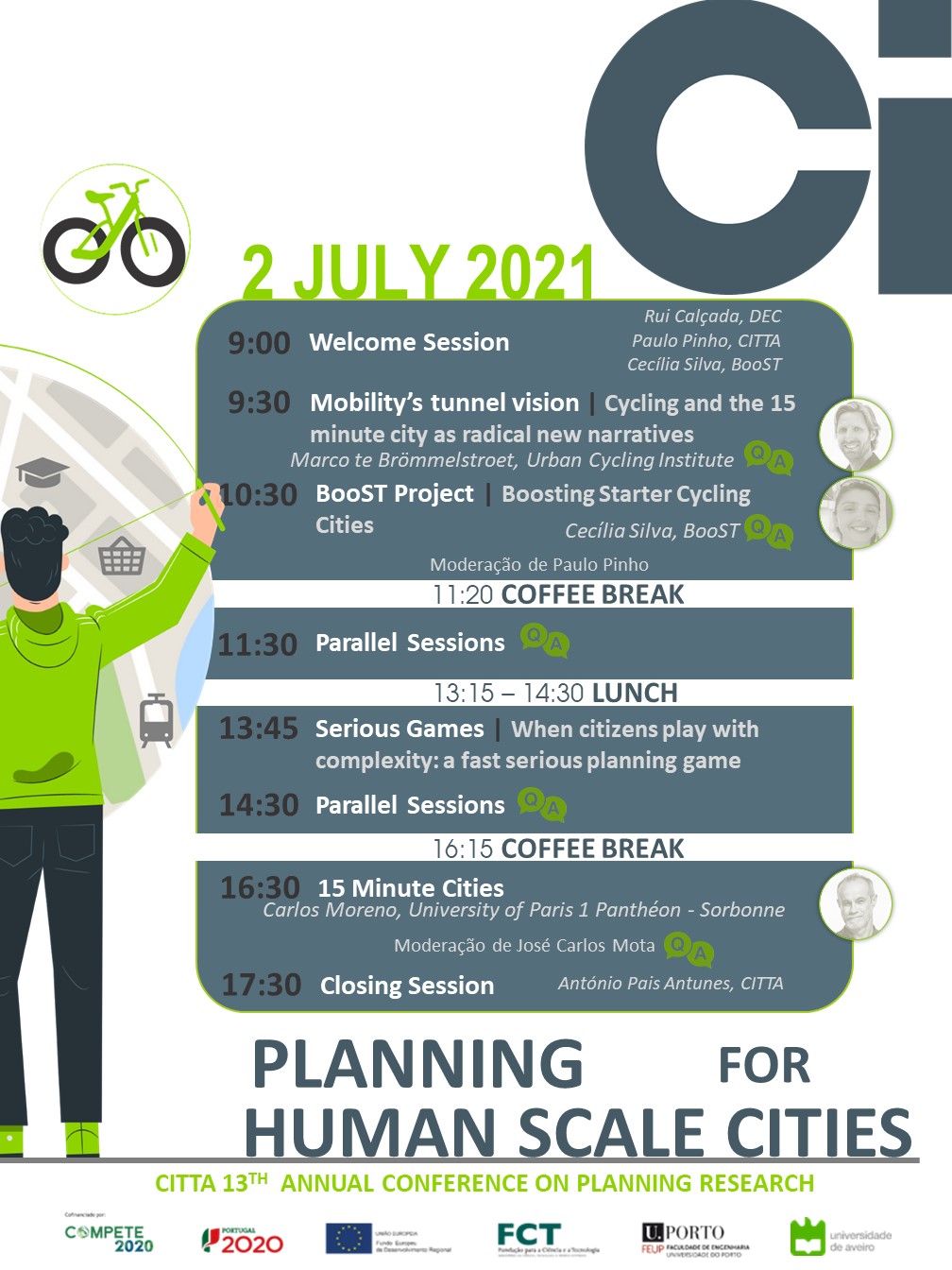 Carlos Moreno is the Scientific director of the Chair «Entrepreneurship – Territory – Innovation» at Panthéon Sorbonne University. He earned recognition as a scientist with an innovative mind, pioneer works and his unique approach on urban issues. He is also a scientific advisor of national and international figures of the highest level, including the Mayor of Paris Smart City special Envoy. In 2019 he received the Foresight Medal by the French Academy of Architecture
He works at the heart of issues of international significance as a result of his research, bringing an innovative perspective on urban issues and offering solutions to the issues faced by the cities, metropolises and territories during the 21st century. Some of his concepts traveled the world: the Human Smart City, the 15min City, the Territory of 30min.

Marco te Brömmelstroet currently holds the chair on Urban Mobility Futures at the University of Amsterdam. He studies how mobility innovations interact with our cities and society and the role of narratives in them. As founding director of the Urban Cycling Institute he developed a host of educational and research projects that use cycling as a lens to study mobilities.

In the scope of the final conference of project BooST, a PhD workshop was organized on July  6th 2021, focused on Research in Starter Cycling City Contexts.

The workshop aimed at bringing together PhD students and Mentors to establish synergic discussions on the main challenges and opportunities affecting cycling research.

The format sought to provide a forum for idea exchange, leveraging learning and informed decision making. It was divided in different sessions; starting with a Plenary Roundtable designed to introduce the Mentors, as well as their research scope and work. Following, a Students’ PhD Research Presentation with two parts introduced the student’s research framework and their expected thesis outcomes. In these sessions, Mentors could bring direct input or feedbacks for improving the students’ research. The last session, Bridging Research in Starter Cycling Contexts was a crucial moment for Mentors and PhD students to discuss common issues and establish synergies between the different works. 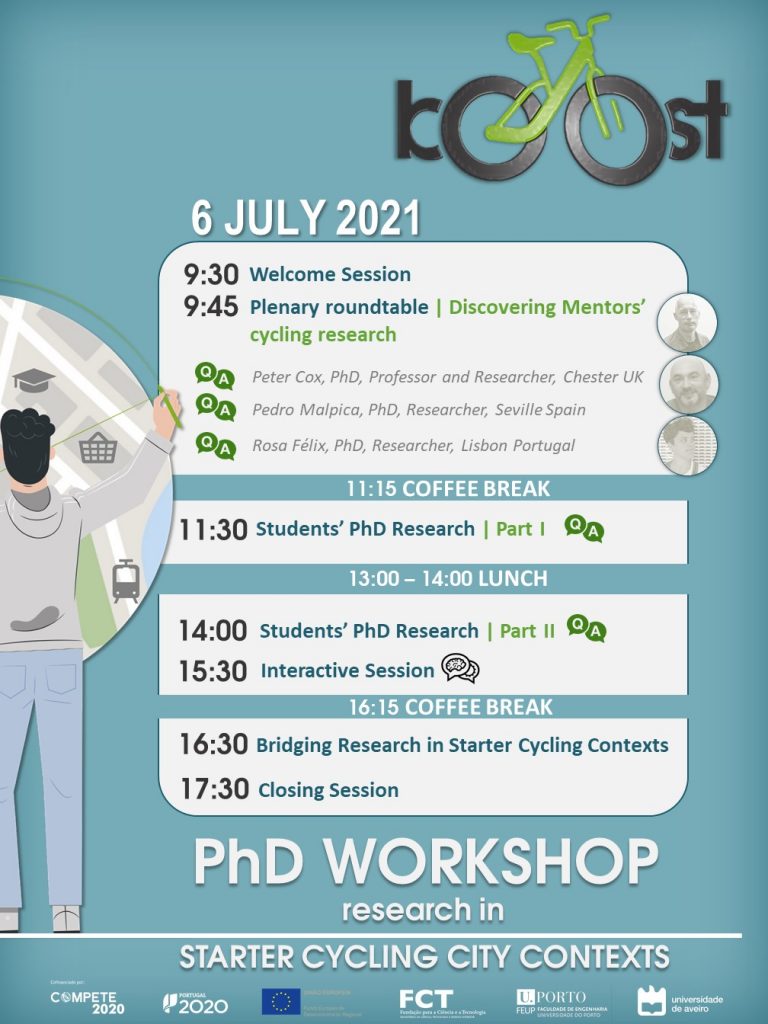 Given the current uncertainty caused by COVID-19, the format of the workshop will be online.

Professor Peter Cox lectures in both Sociology and Politics at the University of Chester in the United Kingdom. His teaching focuses on Social Movement Studies and the Politics of Sustainability, particularly the area of degrowth. As a researcher he was a founder member of the Cycling and Society Research Group in 2004 and a co-editor of Cycling and Society (Ashgate 2007) which came out of the work of that group. In addition to a wide range of academic books and articles, he has been involved in a range of support and advice for local and national policy across the globe, working with both grass roots activism and institutional advocacy groups, as chair of Scientists for Cycling for the European Cycling Federation. A Leverhulme International Fellow in 2014, “Developing interdisciplinary research methods in cycling and the environment”, he worked at the Rachel Carson Center for Environment and Society in Munich.
Recent books include Cycling: a sociology of Vélomobility (Routledge 2019) and The Politics of Cycling Infrastructure (Policy Press 2020) [co-edited with Till Koglin, Lund University] and Peter is currently finishing on a monograph on cycle activism (to be published by Routledge 2022). Prior to re-entering academia in the late 1990s, he ran his own specialist cycle business, working with design innovation for specific requirements as well as organizing cycling festivals and designed and built his own recumbent cycles and raced them at the world championships.

Researcher in the area of urban cycling mobility. Completed her Ph.D. in Transport Systems in 2019, through the University of Lisbon – Instituto Superior Técnico (MIT Portugal program), and completed her Master’s and Graduation in Territorial Engineering in Instituto Superior Técnico in 2012 and 2010. Her Master’s thesis focused on the definition of profiles of bicycle users and modeling bicycle courses in a city with unfavorable terrain. She was part of the team which developed the Cycling Mobility Plan of the municipality of Loulé and worked in the design and integration of the European network of cycling tourism EuroVelo in Portugal. Was a Visiting Scholar at Portland State University in 2017/18, where she developed programming and geospatial data analysis skills, applied to transports and active modes. She is currently a post-doc researcher at Instituto Superior Técnico (CERIS) and a member of the U-Shift lab.