The tool Gross Potential for Cycling (GPC) aims to identify the areas with the higher and lower potential for cycling in relation to the target-population, given their willingness to cycle, and the target-areas, due to their built environment, land use and geographic conditions.

Considering the specificity of starter cycling cities, this method looks at the gross potential, rather than assessing the level of existing cycling infrastructure. By assessing the areas with higher potential, the tool supports starter cycling cities in deciding where to begin cycling investments, increasing the initial chances of success. Progressively, other areas and routes can follow, targeting an integrated, inclusive, city-wide network.

In addition to detailed maps, the tool under development will produce an average GPC, allowing to position the city in a national ranking of cycling potential.

This ranking only presents the municipalities analysed so far in the scope of project BooST.
*Only the central city was analysed in this case, not the entire urban area.

The method is based on a set of ten indicators that reveal physical characteristics of the built environment and population conditions, recognized at an international level as influential to cycling mobility. A map is produced for each indicator, classifying the territory in the analysis (typically a municipality or a set of municipalities) in a scale of 1 (lesser cycling potential) to 5 (greater cycling potential).

Thus, the spatial dimension is given particular importance in the analysis of the cycling potential, allowing the identification of the areas with more and less facility to this transport means, regardless of the average potential of the territory in the analysis.

The ten indicators are gathered in an aggregated map of the gross potential for cycling and in an average aggregated value of the same potential (population-weighted average). The aggregated map results in the weighted average of the previous ten maps, using as weights the values indicated in the figure above. These weights are based on the scientific consensus relative to the impact of each indicator on the promotion of the bicycle as a transport means. The more relevant the indicator, the greater its weight.

P1|Age: identifies the areas where more people with ages prone to cycling reside. The average of each age segment in each statistical subsection is compared to the municipality’s average (*A).

P2| Potential demand density: identifies the areas with a greater density of people whose travel distances are prone to cycling (1,6 – 8km).

P4| Motorization rate: identifies the areas with more driving residents. This value is used as a proxy for car ownership and compared to the national average (*440 cars/resident).

A2| Accessibility to centralities: identifies the areas prone to cycling as a means to perform day-to-day trips (shopping, leisure, etc.).

A3| Accessibility to transport interfaces: identifies the areas prone to cycling as a complement to the commute (first and last mile).

A4| Relative accessibility: classifies the municipalities’ urban area according to the average distance a bicycle can circulate in a determinate time in comparison to a car’s average distance in the same period.

A5| Connectivity: identifies the areas with more blocks with adequate cycling dimensions.

A6| Occupation diversity: identifies the areas with a greater diversity of commerce and services. 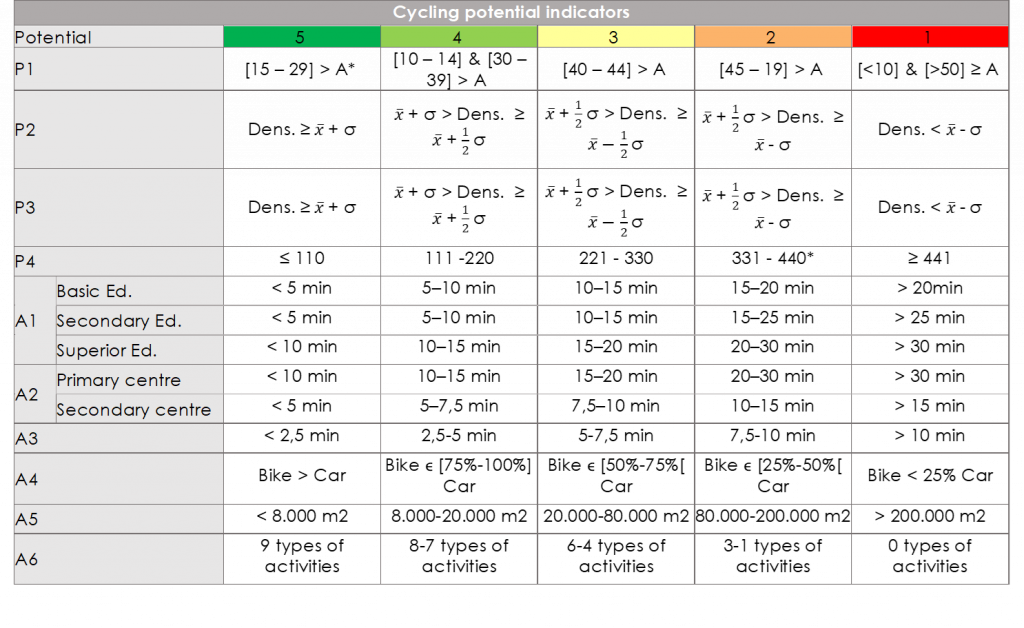