Intersections in the road network should be designed in such way the cycling, walking and motorized traffic coexist safely and efficiently. The configuration of intersections should link the cycling routes offering route coherence, comfort, safety and accessibility. It may include elements such as colour, signage, medians and pavement markings. Such design should take into consideration the movements of all transport modes.

Intersections designed for cyclists are essential for reducing potential conflicts with motorized vehicles, ensuring an increased level of visibility, safety and awareness and denoting a clear priority for bicycle users. The degree of mixing or separation between cyclists and other modes is intended to reduce the risk of collisions and increase cyclists’ comfort.

– On a local access road, the simplest and most agreeable approach for cyclists is right-of-way mixed traffic, allowing cyclists to mix with motorized traffic for crossing and turning left or right. However, in starter cities, where cyclists are less common, motorists may be reluctant to give way to cyclists. It is necessary to clarify the cyclist’s rights and awareness campaigns are recommended (see Education for mobility in a bicycle environment).

– The design approach varies according to the road hierarchy of intersection branches:

– Explain the principles behind the measures taken so that their need and functioning are clear (See Information).

Note: In certain situations, when there is already a great number of cyclists, the construction of bridges or tunnels exclusively for bicycles may be considered, particularly on dangerous roads, with very heavy motor traffic, and in situations with physical obstacles (such as railways or rivers).

In the Dutch case, the protected cycle tracks alongside main streets are continuous at the intersections, so that a junction can be crossed by people of all ages and abilities in a safe and convenient way. The cyclist and the pedestrian always have right-of-way over the car at intersections. 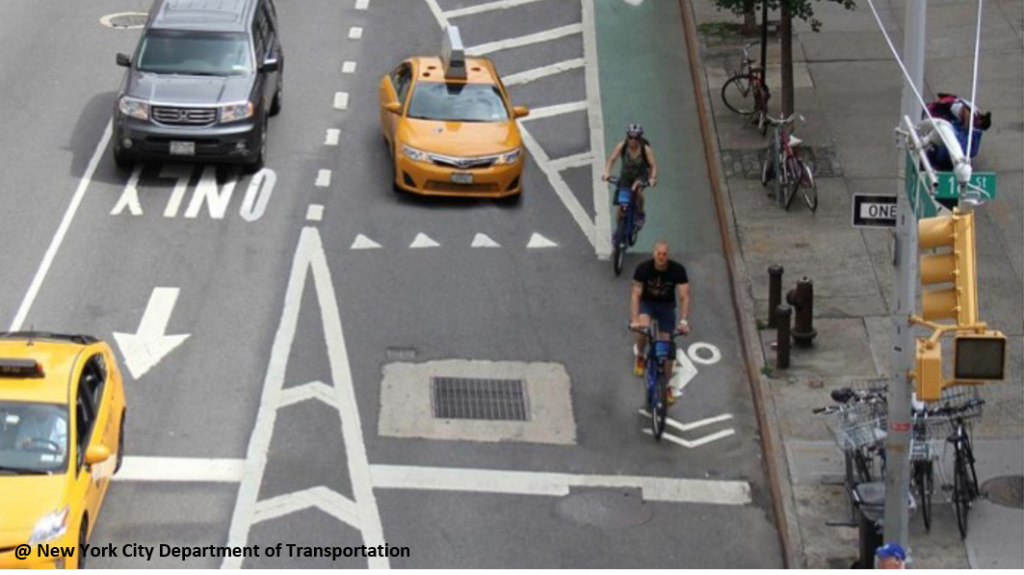 The cycling strategic planning is recent in New York, and since 2014 significant investments have been made towards the construction of protect and segregated bicycle paths. The new bike network has intrinsic urban design challenges to create a safe environment for cyclists, as 89% accidents involving cyclists happen at road intersections. The DOT project reformulated 20 of the most dangerous intersections in the city, developing 4 solutions to guarantee the safety circulation for cyclists: Mixing zone; Fully Split Phase Signal; Delayed Turn and Offset Crossing. 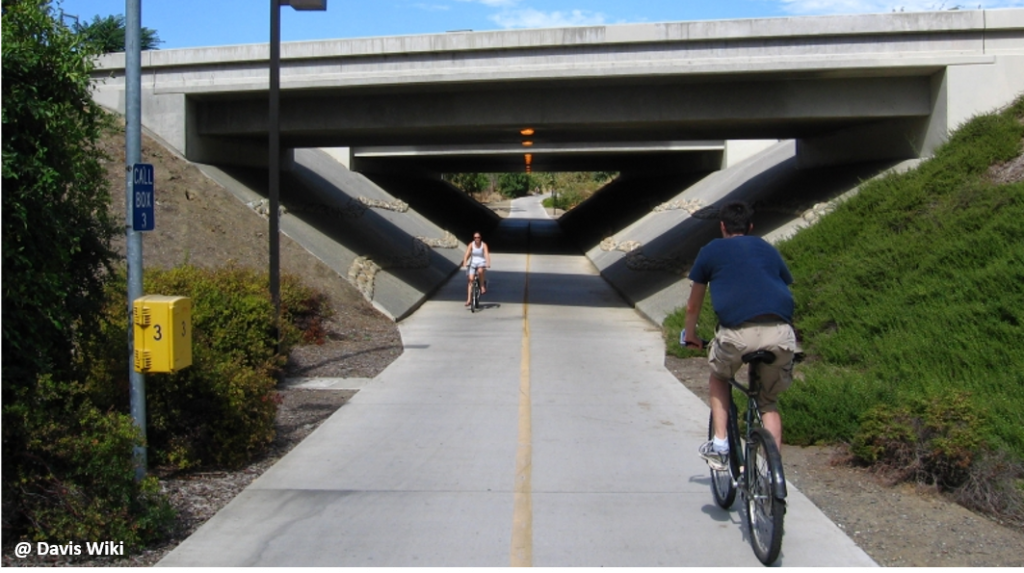 The Davis’s Cycle Plan has incorporated a large number of bike and pedestrian tunnels to provide safe and efficient routes for bicyclists. Most of the tunnels connect the “Green Routes”, which are usually streets with marked bike lanes connecting popular destinations in the city. Likewise, other tunnels are located within university campuses, offering safe and direct routes for those who use the bicycle in commuting trips.